Who is Megan Thee Stallion dating?

She’s the most daring celebrity of 2020: When she’s not topping the Billboard charts with a song so obscene, we can’t even name it, she’s made headlines for a strange night of gunplay. She is undoubtedly one of the biggest female rappers out there right now, in the ranks of Nicki Minaj and Cardi B. Ruth Pete, alias Megan Thee Stallion, is a 25-year-old health care college student from Texas who has become the music industry’s “it” female owing to her raps, guys and the subsequent mayhem that always seems to follow her.

Megan’s burgeoning fame eventually took fire in August 2019 with her song “Hot Girl Summer,” which featured Nicki Minaj and Ty Dolla $ign and a thong-filled video that has over 120 million views on YouTube. It became the hit of the summer back in 2019. You could hear the song being blasted everywhere, in every coffee shop, in every salon, it did not matter where you were.

Her most recent Hot 100 single, “WAP,” is a collaboration with Cardi B. (you can look up for yourself for what it stands for). Throughout the film, the pair dances in different stages of undress. Megan is well-known for her outlandish behaviour, but the ensuing controversy does not always make her pleased.

Although the female rapper is now super famous, her personal life is not everyone’s business. Whilst she grabs the population’s attention with her catchy rhymes and empowering songs, she is quite a mysterious person.

After exchanging a few romantic messages on social media, Megan and Pardison Fontaine started rumours in early 2021. Pardi was also seen carrying Chanel shopping bags while wearing a face mask from Megan’s Fashion Nova range. Shortly later, the “Savage” singer shared a Chanel bag on Instagram, leading many fans to believe it was more than a coincidence.

In a February 2021 Instagram Live session, the “Hot Girl Summer” artist confirmed her relationship with Pardison Fontaine and has since released gorgeous images and photos of the couple. However, with social media buzzing over the prospect of a separation, fans’ interest in the Houston native’s personal life has become even stronger. While Megan’s personal life has become a hot subject, fans should not expect her to reveal her list of ex-boyfriends anytime soon.

As of 2022. Megan Thee Stallion and Pardison Fontaine may have made it quits, according to rumours.

Is our favourite Hot Girl single? According to social media, something is wrong with Megan and Pardi. According to The Neighborhood Talk, many assumed the couple had split up since Megan did not give Pardi a birthday tribute and deleted a few photos of the duo from her Instagram profile.

While Megan’s page has a few slideshow pictures with photographs of the pair together, followers are certain that there is strife in paradise. However, it is not advisable to utilize social media to determine someone’s relationship status. After all, celebrities frequently remove photographs. Not to add that Pardi’s Instagram profile still contains a bunch of photographs of him with Megan. Pardi, on his own, has also shut down a bunch of rumours regarding the couple. On Twitter, he has replied to a few fans very nonchalantly. He also keeps shutting down rumours whenever fans inquire about his relationship status.

Who has the rapper dated?

Fans claimed in 2020 that the rapper and G-Eazy were a couple after the two were seen getting cosy on his Instagram Story. The two are reclining on a couch in the video, and the “No Limit” rapper kisses Megan on the cheek many times.

Apparently, this PDA video fueled suspicion that the stars maybe something more…

Megan, on the other hand, quickly put an end to that rumour. “Lol alright nowww y’all got all y’all jokes out but I am not f—king G-Eazy,” she said on Twitter. Pure speculation as we can see, from excited fans. But it has more or less been shut down.

When asked why G-Eazy was “eating the makeup off her right cheek,” she said, “He like Fenty,” indicating Rihanna’s Fenty Beauty line. We can say, that this one was just a rumour with no credible sources, so let’s call it off.

Megan was previously in a relationship with fellow rapper Moneybagg Yo before receiving some (friendly?) kisses from G-Eazy. The Memphis native appeared on Beats 1 recently, and presenter Ebro Darden inquired as to why the two chose to call it quits.

Despite the fact that the former couple opted to discontinue their romance, Moneybagg stated that they had no ill will against one another. “It didn’t work out, but I wish her the best.” I am quite proud of her. The Megan I know and the Megan you know are not the same person. “It’s still love, we just didn’t agree,” Moneybagg explained.

Megan and Moneybagg started relationship speculations in early 2019 when they began posting PDA photos of each other on social media. The exes unfollowed each other on Instagram in December, which in this day and age, is a clear indicator that a relationship is finished.

The singer was also linked to another musician in 2019 after a video of Hot Girl Meg hanging out with Trey Songz went viral. When it was suggested that the two were more than just friends, she retweeted, “Why y’all want me to be a ‘hoe’ so bad?” Again, we can say that this one is just fans being excited for the female rapper.

“Lol I’ve only dated ONE-person y’all know about,” she continued. Everything else is rumour [and] lie… I’m not addressing s—t, so bye.” Megan was also linked to Chris Brown’s ex-girlfriend Indyamarie in June 2019. According to news outlets and sources, the two were seen together at the Pretty Little Thing BET premiere party. “They’ve been making thirsty remarks on social media recently,” a source informed the newspaper.

Overall, regardless of who the artist is dating, she makes sure it is nobody’s business. 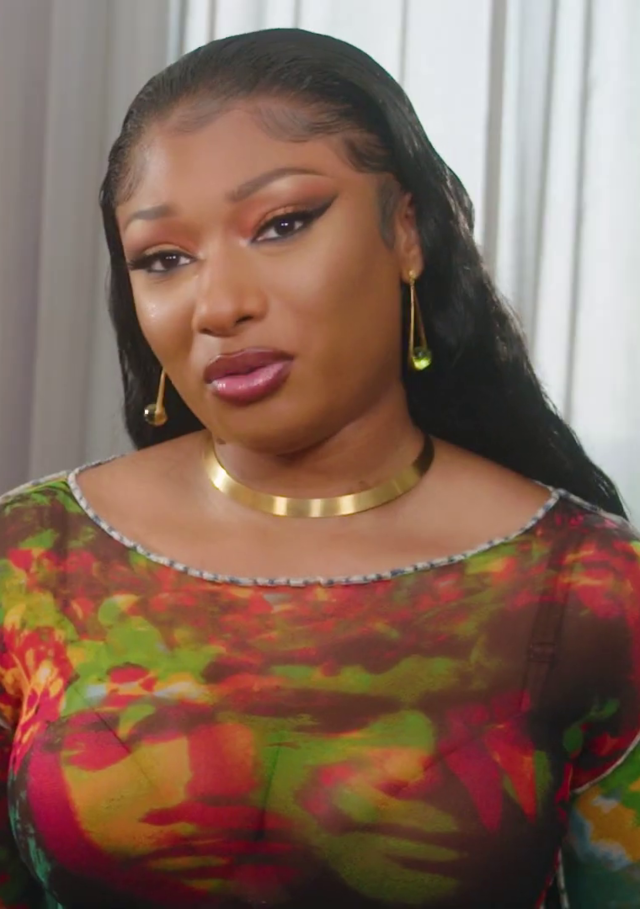