Who Is Ana de Armas Dating?

With critically acclaimed performances in The Gray Man, Knives Out, No Time to Die, and Blade Runner 2049, Ana de Armas is one of Hollywood’s hottest tickets. The tabloids, however, were drawn to her role in Deep Water, not only for her dark and seductive portrayal of a wife with a desperate drama kink, but also for her off-screen relationship with co-star Ben Affleck.

The Golden Globe contender has kept her personal life much more secretive both before and since then. Discover Ana de Armas’ current partner and her previous relationships.

Who Is Ana de Armas Dating?

Ana de Armas’ boyfriend is Paul Boukadakis, an executive at Tinder. Page Six was informed by a source in June 2021 that Paul and Ana met through friends. He has an office in Austin but divides his time between Santa Monica and Texas. Before Ana departed the US to film her new movie, he spent a lot of time with her. The source also mentioned that Boukadakis introduced some of de Armas’ family to him. Paul Boukadakis, Ben Affleck, Cuban artist Alejandro Piero Bello, Édgar Ramirez (though both denied it), Franklin Latt, Marc Clotet, and Ana de Armas have all been publicly associated with her.

Did Ana de Armas Go Out With Ben Affleck?

For most of 2020, Ana de Armas dated Ben Affleck. At one time, they were committed enough for de Armas to meet Affleck’s children with his ex-wife Jennifer Garner and go on vacation with them. Affleck’s mother, Ana, also seemed to enjoy being around his children. There has been excellent interpersonal harmony. Ana is attempting to get to know his children.

Even though the photos are now lost to time, the couple had an official Instagram account. De Armas and Affleck were “extremely happy together” during their relationship. Sadly, it wasn’t intended to be long-term.

Affleck and de Armas dated for nearly a year before splitting up. “She terminated it.” Their partnership was challenging. Ben definitely needs to be stationed in Los Angeles because his kids live there, but Ana doesn’t want to.

A second source described the ex-couples as having “strong love and respect” despite being in various stages of their lives. Ben wants to keep improving himself. He is a good father at home and has three jobs lined up.

They are both content with their current situations in life. In a July 2022 interview with Elle, De Armas said the scrutiny she experienced during her relationship with Affleck was “terrible,” adding that it ultimately prompted her to move out of Los Angeles completely. “Reading that confirmed my feelings that this is not the place for me to be,” she said. “It’s got to be a little bit much.” Nothing can save you. There isn’t a way out. There is always a sense of something being missing or lacking in your life. You feel anxious in this city.

While filming the steamy thriller Deep Water, which is based on a Patricia Highsmith story, Affleck and de Armas got to know one another.

In the movie, they each played a dysfunctional spouse.

When the two were sighted dining together in Cuba in March, dating rumors for “BenAna” began to circulate.

In the early days of the COVID-19 pandemic, they were frequently seen walking their dogs together and celebrating her 32nd birthday, as seen in since-deleted Instagram photos. They also celebrated her birthday together.

Although Ana de Armas isn’t currently married, Marc Clotet is her ex-husband. Clotet is a Spanish actor and model. The couple wed in 2011 and divorced in 2013.

People frequently questioned whether Chris Evans and Ana de Armas ever dated because of their excellent on-screen chemistry in the movie Knives Out. Since then, they have starred together in The Gray Man and the upcoming Ghosted, although they haven’t dated. They are just close friends and coworkers, and in May 2022, Evans celebrated de Armas’ 33rd birthday with her and her partner, Paul Boukadakis.

But what about Ana’s interactions with her male co-stars on the job? Everyone wants to be friends with her and work on-screen with her. Even if de Armas was taken aback by her casting as the Bond girl, no one can dispute her brilliance.

Keanu De Armas has appeared in two movies with Keanu so far. They appeared on the same screen in the movies “Exposed” and “Knock Knock.” Ana was a relatively new actor on the big screen, but she and Keanu got along really well.

That’s not entirely unexpected, though, considering Ana has already acted alongside many well-known celebrities (and held her own). Cinema Blend emphasized that Ana understood that her handsome co-stars were brilliant and that there was more to them than just physical attractiveness.

Hollywood may value beauty, but Ana doesn’t only care about handsome men. Instead, she praises the artistic and acting prowess of her co-stars. Additionally, she exhibits respect for Keanu’s viewpoint and creative input.

Ana most likely knows Keanu Reeves’ eating habits and the projects he’s thinking about taking on next since he claimed the two have “gotten so close.” After all, Keanu contacted Ana when it came time to produce “Exposed” as a result of their collaborative relationship on “Knock Knock.”

Keanu called Ana to make the offer because he thought she would be ideal for the part, as Ana recalled. Being on Keanu Reeves’ speed dial must be amazing! especially as it gives Ana yet another high-profile acting part.

Ana acknowledges that she has also experienced other forms of luck and that some of the opportunities she has had were just the result of luck.

Ana’s climb to prominence undoubtedly has much to do with her talent. However, it helps to have close friends who are powerful in Hollywood (and produce films, too). Who knows what other developments may result from her collaboration with Keanu? 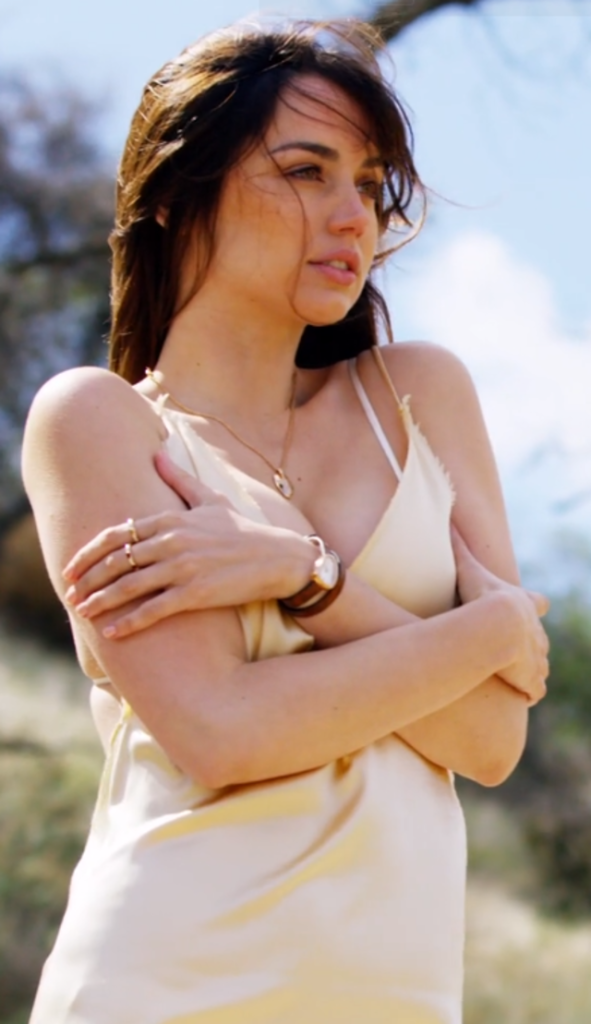