Who is Alex Cooper dating?

Alex Cooper, whose real name is Alexandra Cooper, became well-known after her comedy and advice podcast Call Her Daddy attracted large audiences. Finally, Spotify agreed to sign him to a three-year, over $60 million contract. She talks about relationships and gives sex advice to the majority of female listeners on her podcast. Copper is quite discreet about her personal life, despite the fact that the majority of the topics on her podcast are about relationships.

Who is Alex Cooper’s boyfriend?

Cooper has not made her personal life completely public, but it is tough to ignore the fact that she occasionally mentions it on her podcast. She also revealed that she and her lover had been dating since 2020 in one of her podcast episodes. She gave indications but did not reveal her partner’s true identity, such as his name. She calls her husband “Mr Sexy Zoom Man” while talking about these suggestions. She also mentioned that her partner is an actor and film producer who has worked on NBC programs.

She stated that they initially met at a business-related Zoom conference during the outbreak, which is how she came up with the nickname Mr Sexy Zoom Man for her unidentified companion. They transitioned from virtual to the in-person conversation until they finally met in his hometown of Los Angeles, California, where Cooper currently resides. They got along well, and things started to get more serious. Cooper said in a July 2021 interview with Bustle that her boyfriend is aware of the importance of her life to her. After they started dating seriously, Cooper claimed that her boyfriend’s attitude was more along the lines of, “I admire and support you and your program, but I have a job.” The podcast presenter said that she would have left the relationship if it had been like her previous ones because “I value content beyond anything else.”

She went on to say that she would keep talking about her sex life with her present partner but would make an effort to remain anonymous for as long as possible. “I’m not certain.” He’s prepared, but I’m not, and that’s exciting too,” Cooper remarked. Mr Sexy Zoom Man’s identity is unknown as of right now. Cooper has occasionally made mention of the nickname in the descriptions of her Instagram posts, but she has not identified him or shared a picture of him.

According to the Internet, Mr Sexy Zoom Man is Matt Kaplan.

After she revealed this tiny bit of information about her lover, people on Reddit and Twitter started looking into his real identity. They think Matt Kaplan is her lover, so it seems like they’ve located the right person. producer of motion pictures and Ace Entertainment’s CEO.

Similarly, a number of online people instantly pointed out that Kaplan owns a dog named Henry whom Cooper has shared several pictures of on her social media profiles. Additionally, Cooper is now listed as Kaplan’s spouse on his IMDb profile. These suggest that Mr Sexy Zoom Man, Kaplan, is Cooper’s boyfriend. Kaplan could not be positively recognized as Cooper’s Mr Sexy Zoom Man since Cooper and Kaplan have been silent and have not confirmed anything.

Prior to meeting Mr. Sexy Zoom Man, she had been in a number of relationships. Cooper talked about a few of them in her podcast as well, naturally without disclosing the identities of her ex-boyfriends. She met an unnamed Red Sox player during her second year of college at Boston University, and they began one of her first relationships. There are rumours that her unnamed ex-boyfriend is Mike Napoli, although this is unconfirmed.

According to reports, Cooper’s baseball player boyfriend was over ten years older than she was when they started dating, and their union was toxic. When all was said and done, they parted ways.

She then established a relationship with Noah Syndergaard of the New York Mets, another baseball superstar. They started dating in April 2017 and were often seen making intimate contact. When Syndergaard tweeted, “Baseball is my significant other,” Cooper and Syndergaard made their separation official.

Cooper admitted in April 2021 that she had a fling with YouTube sensation Logan Paul. She said that she had only brought up the affair because Paul had brought it up. Paul claimed on his Impulsive podcast shortly after she revealed this information that Cooper was the one who leaked it and that he had only told his closest friend about his affair.

On her podcast, Cooper has previously discussed some of her previous relationships and given her ex-boyfriend titles like “guy from a renowned family in New York City,” “Door 3,” “Canadian,” “M*** Hunter aka Ghost Writer,” and “Slim Shady.” Fans have speculated [and agreed] that Door 3 is Shane Greene, Canadian is James Neal, M*** Hunter aka Ghost Writer is Muj Fricke, Slim Shady is Noah Syndergaard, and the individual from a “prominent family” in New York City is apparently John Schlossberg on Reddit, as noted in the link above. It cannot be taken literally that Cooper’s nicknames match to the people named above as they are only fan hypotheses. 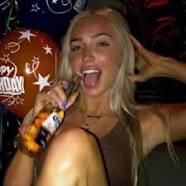