Who is Madonna dating?

Madonna, an American singer and songwriter who is regarded as the Queen of Pop, has been one of the most significant individuals in modern culture. She’s well-known for pushing the limits of popular music by challenging conventional attitudes and expressions, which sometimes challenge what was previously acceptable on the global stage.Naturally, many will recall Madonna smooching Britney Spears at one of the most famous moments in the 2003 VMAs, an act that changed people’s opinions on same-sex relationships. Madonna’s groundbreaking music, on the other hand, has left its mark on the industry.

Madonna Louise Ciccone was born on August 16, 1958, in Bay City, Michigan, to Madonna Louise Fortin and Silvio Anthony Ciccone. Madonna spent her childhood in Pontiac and Avon Township near Detroit. In 1963, when she was just five years old, Madonna’s mother died from breast cancer at the age of thirty. Despite this fact, the death of her mother had an impact on her youth.

Madonna’s music career took off when she decided to go solo, and by 1985, she had grown into a top-selling recording artist and achieved royal status as Queen of Pop. Madonna has had a number of unusual relationships throughout her career, and she’s even remarried twice. Madonna dated a long list of some of the world’s most successful and attractive men, including prominent actors, musicians, male models, and even dancers. It doesn’t come as any surprise that she is one of the world’s most famous icons in the history of popular culture.

The Queen of Pop’s first recorded, public romance was anything but conventional. While living in New York City during the mid-1970s, struggling as a waitress and fledgling dancer, Madonna met Dan Gilroy. In her ambition to succeed in the big city, Madonna also acted in b-grade films and indie films that frequently did not pay as promised at the time.New York attracts a diverse crowd, from wannabe musicians to aspiring actors. However, many of them are susceptible to the suited vultures who wait with bated breath to capitalize on their desperation. Madonna has fallen victim to New York’s streets on numerous occasions, and one of her most regretted performances was in 1979’s A Certain Sacrifice.

Although many of the performers in the film were never paid, Madonna was one of the few who was compensated at least $100. Madonna attempted to purchase the distribution rights to the film after she had reached her peak of popularity, but has thus far been unsuccessful.

Madonna also fell victim to sexual assault one night, returning home from a dance rehearsal. Of the incident, Madonna has stated that the memory of it still haunts her, and is a taste of her own weakness. Despite her tough girl persona and all that she is capable of, she could never have saved herself from the trauma of that night. Madonna, regardless of how terrible her life was, wouldn’t give up until she achieved success. It was around this time that she began dating Dan.

Dan and his brother, who had been preparing for a career in music since younger years, were both still at the beginning of their endeavors. Madonna was notorious for her dancing, and Dan as a prospective musician. At the time, Dan and his brother resided in an abandoned synagogue in Corona, Queens, that they utilized as both living space and rehearsal studio. Dan met Madonna at a party, and the two hit it off almost immediately. Madonna’s first encounter with music began when she was invited to a rehearsal by Timmy. It was at this point that Madonna made her first appearance in the music world, playing the role of their band’s drummer. She soon decreased her dancing lessons to once a week, and began studying music seriously. After meeting disco artist Patrick Hernandez, Madonna was asked to perform as a dancer and back-up vocalist for him, and she received an opportunity to go on tour with him across Europe.

While living more extravagantly in Europe, Madonna felt trapped in a life in which she had no control. She received vocal training and longed to return to the United States, despite having all the money in the world. Dan submitted love letters to Madonna while she was on tour, hoping that she would reconsider returning home.

Madonna moved back to Queens after a year with Hernandez, and this time she was more focused than ever. Rather of being satisfied just as a drummer, she wanted to sing now, and her ambition drove the formation of the group The Breakfast Club before they could achieve any success. However, before they could achieve any measure of success, Madonna decided to move back to Manhattan in order to pursue a solo singing career.

Unfortunately, her relationship with Dan came to an end, but she reunited with an old flame, Steve Bray, an R&B drummer who Madonna met years ago at a club and has now joined her efforts in forming a new band. Madonna offered Steve a drink, and he accepted. They dated for a short time after that, and one thing led to the next. When they started their band, which went under many names including “The Millionaires,” but eventually settled on “Emmy,” the two reignited their lost love. Dan gave Madonna the nickname ‘Emmy’ as an insult; ironically, her band’s name is derived from a disparaging term for females used by Dan previously

After Madonna signed her first record contract with Sire Records, her relationship with Steve deteriorated. Despite his promise to allow him produce for her, Madonna felt she had hit the jackpot and wasn’t about to squander it. Instead, she picked someone better qualified to handle the job, which paid off in the end. Steve has since reconciled with Madonna, but they did not rekindle their romance. During this season, there have been suggestions that Madonna had a third relationship with the graffiti artist Jean-Michel Basquiat. According to reports, Madonna broke up with Basquiat because of his heroin addiction and then he died in his studio from an overdose in 1988.

Gossipers also claim that Madonna had a romantic relationship with the renowned DJ John “Jellybeans” Benitez while she was making her debut album. Although she acknowledged flirting with him and giving him credit for landing her initial record deal, there’s no proof of a romantic connection between them. Madonna’s career climbed quickly, and she made full use of each chance to amass clout in the film industry. She began with minor parts before progressing to larger parts that eventually led to her first marriage.

Madonna met American actor Sean Penn in 1985, while she was on a run of record-breaking albums, with whom she would later star in the box-office flop Shanghai Surprise. At first, their high-profile relationship appeared to be too good to be true, but after dating for little more than a year, the two married. Madonna said in an interview just before the wedding that the two of them are very similar and might cause greater problems in the relationship than any benefit. Indeed, they both had big egos, were quite successful, and had a short fuse. Despite their status as one of Hollywood’s most renowned couples in the eighties, their marriage fell apart due to infidelity, stubborn arguing, domestic abuse, and a slew of other factors. “I don’t recall them ever having a decent conversation in the four years we were married,” Sean mused at one point.

In his own words, he describes it as being extremely loud. They filed for divorce in 198, with the highly publicised proceedings serving to expose additional reasons for their split.Sean is also accused of putting a strain on her acting profession. Aside from that, Sean tended to be extremely possessive throughout their relationship. Because he believed they kissed, Sean assaulted David James Walonski, a songwriter who worked on Madonna’s most recent album, because he thought they had kissed. While there was evidence to support Sean’s domestic abuse allegations during the divorce proceedings, the claims against him in the divorce papers were insufficient in terms of proof.

Madonna supported Sean in his lawsuit against the Empire creator Lee Daniels, who released these allegations to the press. Madonna declared in legal paperwork that the claims of domestic abuse, as well as suggested occurrences when Sean tied her up, were all untrue. Since their divorce, Sean and Madonna have reconnected as friends, although they have moved on with other individuals. Sean has since acknowledged that at the time he wasn’t ready for marriage, and he has made several lessons from his prior mistakes.

After her divorce from Sean, Madonna did not appear to be in a hurry to remarry. Instead, she had a succession of short relationships with several prominent celebrities throughout the 1990s. In 1990, she starred in the film ‘Dick Tracy’, sharing the screen with the original ladies man of the era, Warren Beatty. However, their relationship didn’t last long, and by 1991 Madonna had reportedly already had two more affairs.

She had a brief relationship with Tony Ward, a model who appeared in the music video for her song “Justify My Love.” They had a brief relationship after that, according to baseball all-star Jose Canseco, and Madonna even asked him to marry her and become the father of their children. Canseco turned down her offer, claiming that he was trying to work things out with his wife because he would lose a lot of money if they divorced. Madonna tried to reassure him by telling him she had enough money and he didn’t have to worry, but things didn’t seem to go Madonna’s way, as she was rumoured to want Cuban children.

Then, in 1992, Madonna had a brief romance with rapper Vanilla Ice, and despite the fact that their relationship was brief, it was documented in her book ‘Sex.’

Madonna became involved with NBA all-star Dennis Rodman in 1994 while trying to reinvent her image, but the relationship ended quickly once again.

Despite the fact that she was ten years Guy’s senior, their subsequent marriage seemed to be going well at first, and it ended up being the Queen of Pop’s longest relationship. By the year 2000, the couple had married in Scotland and had two children together, one adopted and the other paternal. In August 2000, Rocco Ritchie was born, and in 2006, she began the adoption process for David Banda.

Her adoption was completed in 2008, the same year her marriage to Guy ended. Despite the fact that her divorce from Ritchie was much less messy than her divorce from Sean, it made headlines in the United States and the United Kingdom. Guy said during the divorce proceedings that he felt like his life had turned into a soap opera since he married Madonna. Irreconcilable differences were cited as the reason for the divorce.

Their marriage had simply ceased to function as they grew apart, according to Madonna. Guy, according to Madonna, frequently questioned her decision to keep making music. She claimed the cracks began to show after years of marriage, children, and sharing a life together. Things may have seemed perfect at first, but as they grew older, the relationship lost its romance, and it turned out to be nothing like she had hoped for.  Despite rumours that she had an affair with married baseball player Alex Rodriguez, Madonna’s divorce was a heartbreaking experience, and she stated that she would rather be run over by a train than marry again.

Madonna’s newest love interest is dancer Ahlamalik Williams, a 26-year-old member of the Raw By Nature dance crew who met Madonna after being hand-picked by her to join her dance crew on tour in 2015, and has since been a regular feature on Madonna’s tours. 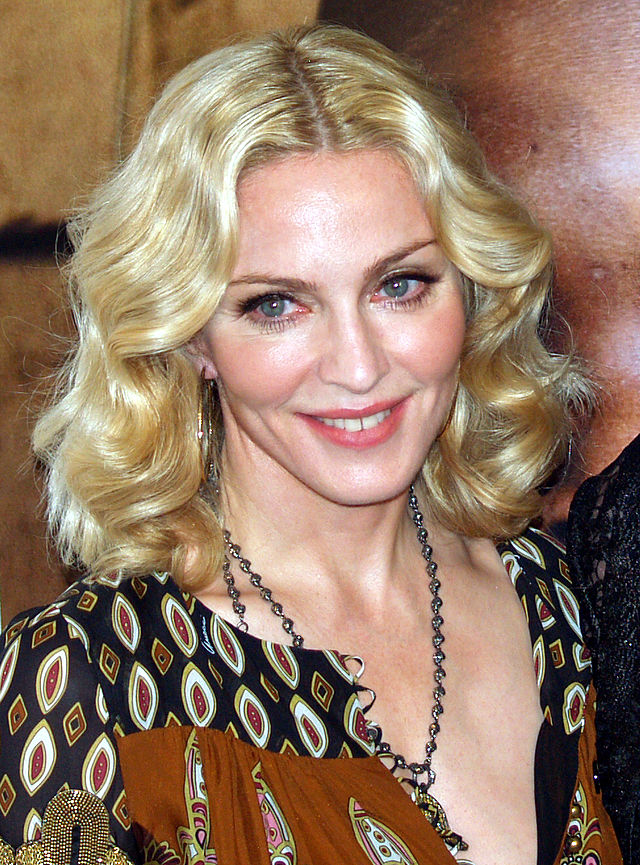