Who is Eminem dating?

Eminem is a well-known rapper, songwriter, record producer and executive, film producer, and actor from the United States. He is regarded as one of the most influential rappers of all time, and his brilliance is frequently praised. Eminem is well-known for his solo work as well as his membership in the hip hop group D12.

Many notable women have dated Eminem, and this list will provide you with additional information on these lucky ladies. This thorough dating history includes Eminem’s current girlfriend, prior relationships, images together, and dating rumours, and it tells you all you need to know about Eminem’s love life.

This list includes Eminem’s ex-girlfriends as well as extra information about each, such as their birth dates and professions. These ladies come in different shapes and sizes, but they all have one thing in common: they’re all women who Eminem has either dated or had a brief relationship with. It’s easy to be envious of the ladies Eminem has dated, so do your utmost to keep your envy in check.

Mariah Carey and his ex-wife Kimberly Scott are among Eminem’s girlfriends. See below for a list of women Eminem has dated.

Karrine Steffans, a former video vixen turned novelist, has been associated to various celebrities and rappers and has starred in over 20 music videos.

Steffans is a New York Times bestselling author of three books: Confessions of a Video Vixen, The Vixen Diaries, and The Vixen Manual: How to Find, Seduce, and Keep the Man You Want. She has worked as an actress and a video vixen, appearing in over 20 music videos, several of which feature multiplatinum-selling rap acts. Steffans spoke on a number of college campuses in 2007 and 2008 about her involvement in the hip-hop industry and its expectations of women. Karrine revealed a list of celebrities she had dated, and Eminem is one of them. They were said to be dating in 2003.

Kimberly Anne Scott and Eminem had a tumultuous relationship. Kimberly met Eminem in high school and moved in with his mother and sister after they ran away from home and began an on-again, off-again romance in 1989. They married in 1999 after having their daughter Hailie in 1995.

Their marriage lasted barely two years, resulting in their divorce in 2001. They remarried in 2006, however, their relationship lasted even less, with Eminem filing for divorce later that year.

They divorced amicably and enjoyed joint custody of their daughter, Hailie. They also share custody of Alaina Mathers, Eminem’s niece whom he adopted in the early 2000s. She is the biological daughter of Kim’s late sister Dawn, who died as a result of an overdose back in 2016. Eminem also adopted Whitney Mathers, who now utilizes they/them pronouns. They are the children of Kim and her ex-husband Eric Hartter. After their father’s drug addiction and various legal troubles, Eminem adopted Stevie and now has full custody.

Kaya Jones and Eminem used to date, according to some news sources. Kaya claimed to Bold TV that she had previously bombarded both Eminem and Dr Dre’s tour vans. Kaya Jokes is a vocalist who was a member of The Pussycat Dolls from 2003 to 2004, although she has since started a solo career.

Despite Mariah Carey’s denial that she dated the Lose Yourself singer, Eminem has gone out of his way to show they were ever together. According to Thetalko, the 47-year-old played voicemails reportedly delivered by Mariah.

“Yes, me and Mariah did have a relationship for approximately six, seven months, but it didn’t work,” the rapper admitted. I wasn’t interested in what she was interested in; our personalities clashed. Eminem went on to label Mariah a diva before adding, “she is a bit more normal.”

In an on-air interview with Larry King in 2002, Mariah denied ever dating Eminem, saying, “I chatted to him (Eminem), I spoke to him a couple of times, whatever.” But what about having an intimate connection with me? I can count the males on one hand, and he isn’t one of them.” “I hung out with him, I talked to him on the phone,” she claimed. I believe I was with him four times in all. And I don’t consider it to be dating.”

The actress is said to have admitted to spending a night with Eminem in the early 2000s.

The rapper has not verified or rejected these allegations. Joy is well-known for her roles in Avengers: Endgame and X-Men: Dark Phoenix. 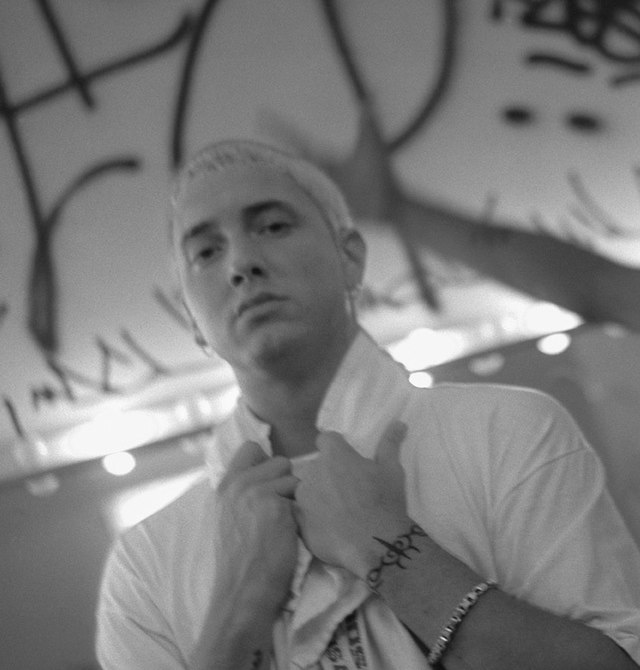