Who is Pete Davidson dating?

Women adore a man who is capable of making them laugh. Pete Davidson has surprisingly become one of Hollywood’s most eligible bachelors since his debut on Saturday Night Live in 2014. The 27-year-old comedian was so influential that the name “BDE” was coined in his honor. To refresh your mind, BDE stands for “Big D—k Energy” and has gained a slew of female fans. If you are one of his female fans, we are very pretty sure that you desperately want to know who Pete Davidson has ever dated before, you might want to know if he is currently dating someone or not.  Find out more below.

Pete dated Carly, a comedian and star of MTV’s Girl Code, in 2015, albeit the two have kept their relationship private. Since their breakup, they appear to have maintained a connection, with Carly co-starring in Pete’s 2020 film The King of Staten Island and later thanking him on Instagram for the opportunity.

Pete has been in a long-term relationship with Larry David’s daughter Cazzie, whom he credits with assisting him in achieving sobriety. In her 2020 book No One Asked For This, David, the daughter of Larry David of Curb Your Enthusiasm, disclosed a lot about her two-and-a-half-year romance with the Saturday Night Live actor.

He described the couple as “kindred spirits” when they initially started dating in 2016. She did concede, though, that Davidson’s mental health issues had taken a toll on her. “Previously, self-harm and suicide threats had resulted from insignificant events like the last minute of an escape room before the timer goes off, but I’m the only one in the room and all the clues are tricks,” she recounted.

David attempted to reunite with Davidson in a moment of weakness just days after she ended their relationship while on a family vacation. However, she was taken aback when he later sent her a text message revealing that he had moved on.

She accessed Instagram two days later to find her ex had “posted a photo of himself with his hand covering his face to show off his new finger tattoos,” she wrote. “The black ink had covered up my name, which had been inscribed in cursive on his ring finger.”

They split up in May 2018, despite Pete claiming to be “the luckiest guy in the world.” Pete confirmed the news to Complex: “We’re no longer together. She’ll be wonderful and fine because she’s a gifted young lady. Yes, I believe she will be fine.”

They met at the Billboard Music Awards in May 2018 and became engaged in June. Pete had her initials tattooed on his hand, as well as a pair of bunny ears – Ariana’s hallmark – behind his ear, after she was said to be’smitten.’

E! News verified that Davidson and Grande were casually dating weeks after their breakup—and not long after Grande’s split from rapper Mac Miller.

However, things took a turn for the better when the couple—who met two years ago when she hosted SNL—went Instagram official and received matching tattoos on their one-month anniversary. By June, the couple had been engaged and were sharing a $16 million NYC loft with their beloved pet pig.

They’re basically two people who fell in love immediately and are always making each other happy. “This past weekend, they both started talking about it. It’s not something they’ve been keeping hidden.”

Their whirlwind affair came to an end in October 2018, one month after Miller was discovered dead of an apparent overdose at the age of 26. Davidson dealt with the breakup by incorporating it into his standup comedy routines, while Grande turned her emotions into the smash hit thank u next song and album.

They were reportedly they were very happy together,’ but the press was enthralled by their 21-year age difference. Pete said during an interview on Weekend Update: “People seem to have a strange fascination with our age disparity, but it doesn’t bother us. But, then again, I’m a novice in this field.”

Davidson and the Underworld actor went to parties, hockey games, and even supper with Beckinsale’s parents during their brief courtship. The affair, however, ended after three months, according to a source, who said that it “run its course,” adding, “They still talk and are extremely friendly.”

They were seen together at Seberg’s Venice film premiere, but they split up in October.

During the summer of 2019, Pete dated Margaret for a few months. According to a source, three months following his breakup from Grande, the King of Staten Island star began a “casual” relationship with Beckinsale. “They spend the most of their time on opposite coasts,” a source told E! News at the time. “However, they will continue to converse and have fun together.”

They were first linked in October of this year, when they were photographed having brunch in New York before allegedly returning to her apartment. The duo said they were only pals, yet they were seen holding hands multiple times in New York. At the time, Kaia was also wearing a ‘P’ necklace, which many assumed meant for ‘Pete.’ Pete and Kaia separated up a few months later in January 2020, according to Page Six.

The comedian and the Once Upon a Time in Hollywood star initially ignited dating rumors when they were seen together in Venice for the opening of Qualley’s film, Seberg, in August 2019. The two were later seen taking a romantic stroll through the city, walking hand-in-hand.

While neither Davidson nor Qualley ever confirmed their relationship, her mother, Andie MacDowell, did in an interview. “She has a fantastic relationship with him,” MacDowell told People. “But I don’t want to step on her relationship too much.” “They seem to get along well.” “They remain friends,” a source told Us Weekly at the time, when the couple called it quits after two months. 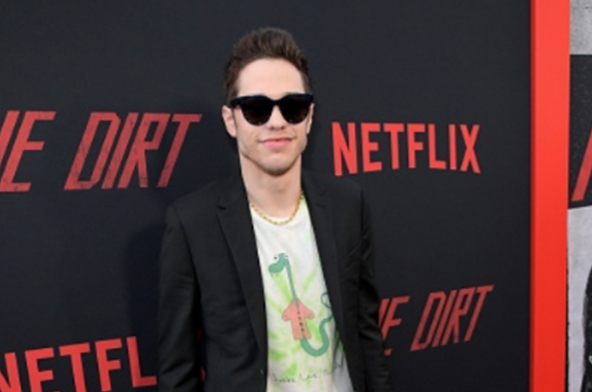